Cancer treatment, as challenging as it sounds, has been revolutionized by recent advances in immune checkpoint blockade (ICB) therapies, which use monoclonal antibodies (mAb) to block the suppressive immune checkpoints, helping the patient’s immune system to kill cancer cells. However, despite several clinical case studies of success, some patients still do not respond well or not at all to these therapies.

What could be an explanation to these negative responses? 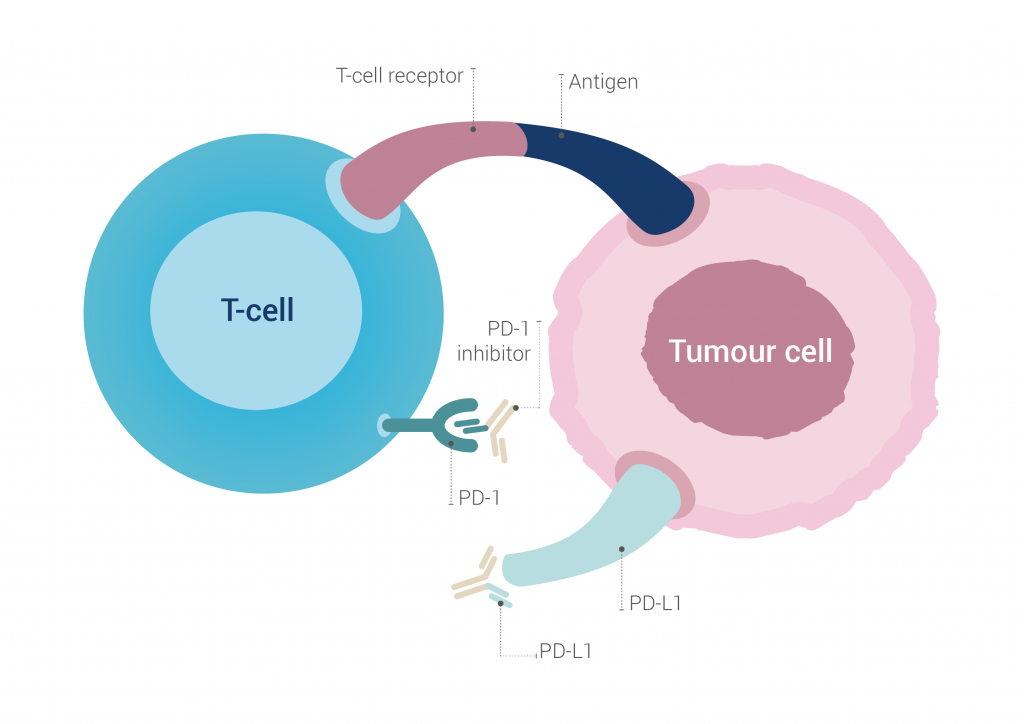 One promising way to answer the question is to fully characterize the heterogeneity and dynamics of tumor infiltrating lymphocytes (TILs) before, during, and after ICB for cancer treatment. Thankfully, with recent advances in single-cell sequencing technologies, the landscape of tumor TILs in immunotherapy has been gradually completed at an unprecedented resolution, shedding light on the immune system dynamics and its relationship with clinical responses in specific groups of patients (Tirosh et. al., 2016; Clark et. al., 2019;  Yost et. al., 2019, etc.)

In this work, we use multiple single-cell transcriptome data sets from BioTuring Browser to highlight shared perspectives on using the TIL landscape for predicting response to immunotherapy. We focus, in particular, on CD8+ T cells, a very complex and dynamic population that has shown to impact clinical responses in specific patient groups.

Sequencing more than 16,000 immune cells in melanoma patients, Sade-Feldman & Yizhak et. al. (2018) provided a detailed picture of the TILs’ heterogeneity, especially the CD8+ populations, between respondents and non-respondents to ICB. Their study suggested that non-respondents exhibited a higher fraction of exhausted or dysfunctional CD8+ T cells. The single-cell dataset in this paper was curated and currently indexed in BioTuring Single-Cell Database.

We sought to reproduce this finding and also get some other insights that maybe were not covered by the authors of the study. In order to do that, we first sub-clustered all the T cells in the data and visualized them with UMAP. Surprisingly, the cells’ trajectory on UMAP maps to cell exhaustion levels as shown in Fig. 2a. 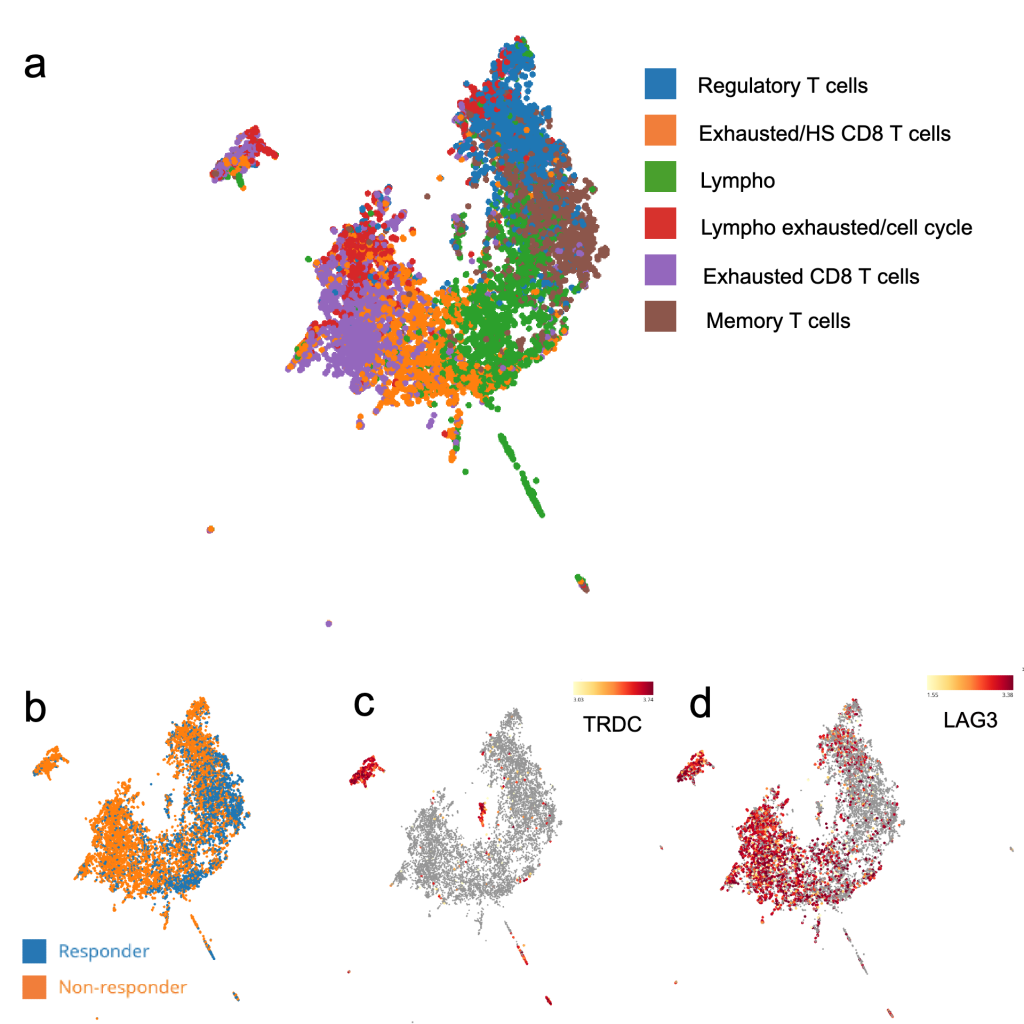 We next compared cell type proportions between responder and non-responder patients. In this analysis, we found that the total percentage of exhausted CD8+ populations in the non-response group (57.76%) is higher compared to the response group (25.46%) (Fig. 3a,b). These results confirmed the finding from Sade-Feldman et. al. 2018. 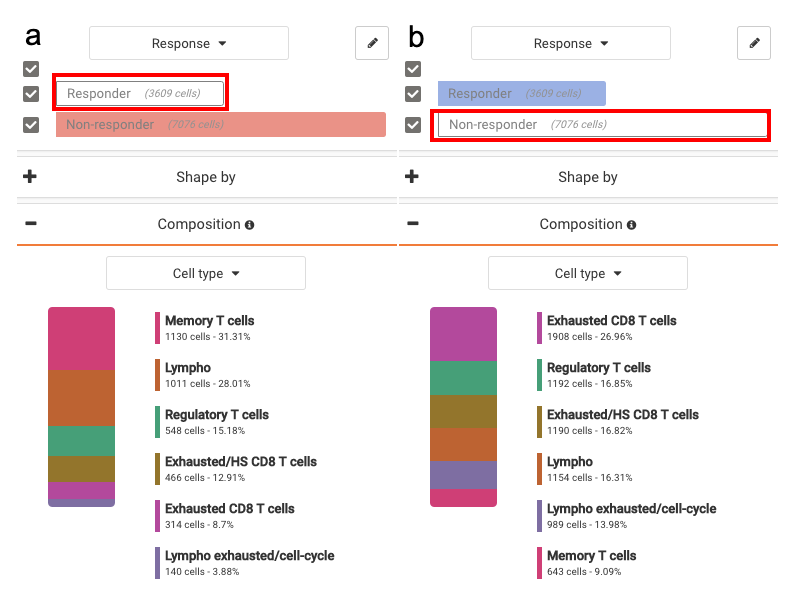 Figure 3. Cell type composition of (a) responders and (b) non-responders.

To find whether this finding is reproducible, we followed the authors’ study to select and sub-cluster the CD8+ T cell populations to just focus on its subsets and dynamics. To select these cells, we used a bi-axial feature plot, graphing cells by CD3+ and CD8+ expression (Fig. 4a) and select the cluster in the middle, containing cells that expressed both genes. After sub-clustering and coloring the CD8+ T cells by responder and non-responder, we identified a special CD8+ T cell subpopulation highly specific to responders (Fig. 4b). We then proceeded to find the marker genes for this population. 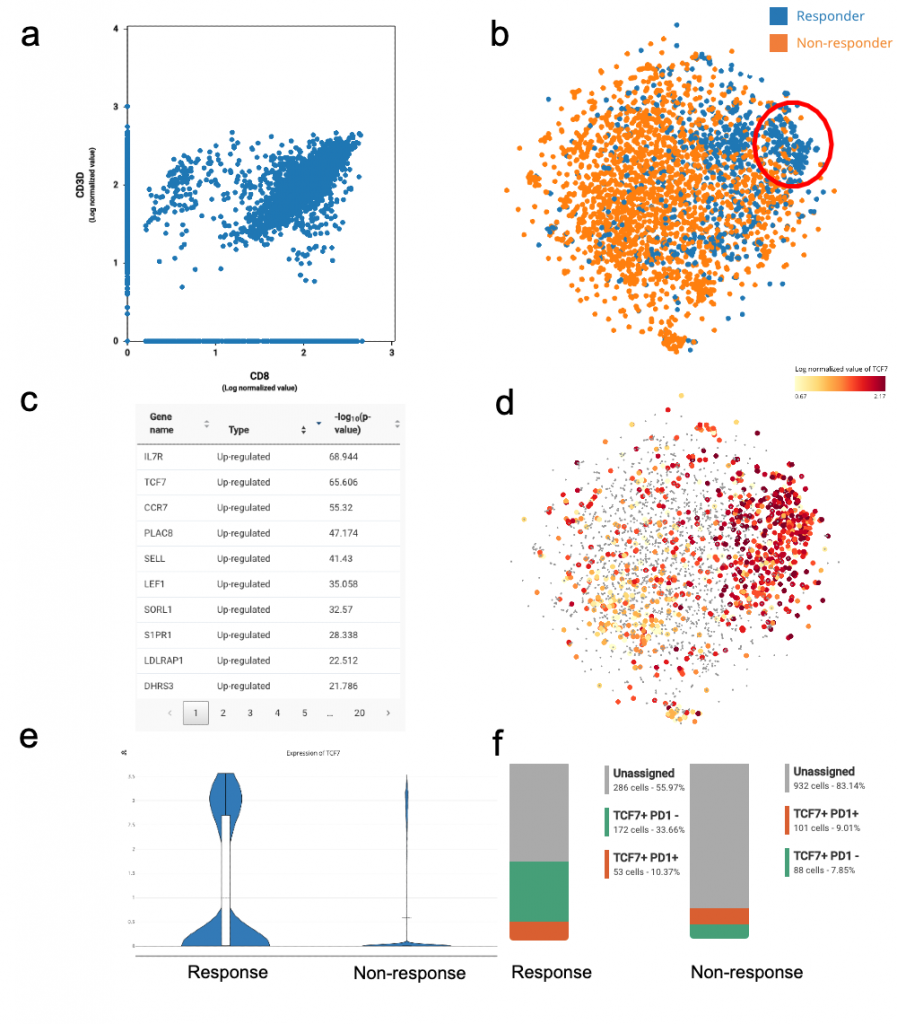 Notably, TCF7, which is part of the Wnt/ b-catenin signaling pathway, was previously known to reinvigorate CD8+ T cells in response to PD-1 blockade to resolve chronic infection (Im et al., 2016; Utzschneider et al., 2016). Zhou et al. (2010) also suggested that the gene was crucial for differentiation, self-renewal, and persistence of memory CD8+ T cells, which could potentially explain its link to favourable clinical responses of ICB in melanoma.

In addition, we also found that the TCF7+ PD-1- population was enriched in the pre-treatment phase of respondents (accounting for 33.66% of the total CD8+ T cells) (Fig. 4f). This suggested that abundance of TCF7+ PD-1- CD8+ T cell populations before treatment could predict a favorable outcome of ICB.

Is TOX a useful predictor for PD-1 blockade? 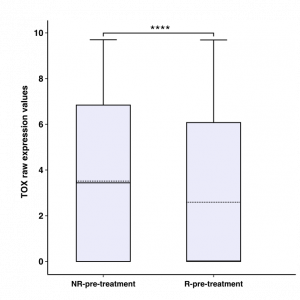 Fig 6: Student’s t-test of TOX expression between non-respondents and respondents before ICB (performed with BioVinci).

Above are some reproducible insights into the TIL dynamics under ICB, reanalyzed using BioTuring’s public single-cell data repository. We hope this helps to confirm the findings in a data-centric approach for other studies such as this one, and at the same time provides more insights into the CD8+ T cell dynamics under immune checkpoint blockade. Further analyses into phenotype-clonotype stability and clonal replacement of exhausted CD8+ T cells following PD-1 blockade will soon be coming in the next episode. These insights are really important to better understand the dynamics in immuno-oncology therapies and to understand why groups of patients are better responders than others.