To judge whether a cell is of bad quality, quality control often looks at the three following parameters:

Despite no agreement on how to set single-cell quality control parameters, a rule of thumb exists:: to exclude cells with less than 200 genes and more than 5% of mitochondria counts. This set of thresholds comes from early studies, such as Ilicic et al, (2016), Lukassen et al., (2018) and was recommended by Seurat, thus making it widely popular in the community of single-cell RNA-seq researchers.

There are some additional parameters that help speed up downstream analysis and reduce noise, such as:

In BBrowser, users can either go with the default preprocess settings that we provide, or adjust the parameters for your specific needs. 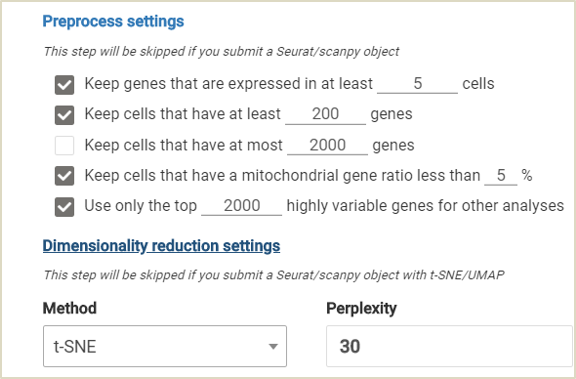 BBrowser makes single-cell quality control easier. Users have a range of parameters to select and adjust as you wish with simple UI

The parameters mentioned above are not universal. For each dataset, several factors can affect how each threshold should be determined. Here are 3 examples highlighting the importance of this point.

Example 1:  the mitochondrial count parameter is highly dependent on the sample type. Mitochondrial genes are involved in several processes, such as gene regulations, cancer, aging, degenerative diseases, etc. A high mitochondrial count may indicate high respiratory activity, rather than apoptosis. Different tissues also vary in the mitochondrial count. Mercer et al. (2011) observed that this number can range from 5% to 30% between tissues due to varied energy demands. Other factors can also contribute to the variation, such as species, sequencing platforms, sample conditions, etc. A recent study from Osorio & Cai (2021) found that the average proportion of mitochondrial DNA in scRNA-seq data from human tissues is significantly higher than in mouse tissue. The authors recommended a new standardized threshold for the mitochondrial count of 10% in human samples, and 5% for mouse samples.

Example 2: the minimum cells per gene threshold. Usually, genes expressed in less than 5 cells are removed, however, this threshold should be set according to the smallest cluster size and the overall sample size.  In the example below from Wang, et al. (2016) study on the human endocrine pancreas transcriptome, some cell types exist as very small clusters (e.g acinar cell – 6-cell cluster, δ-cell – 9-cell cluster). A threshold of 5 cells per gene may remove several specific marker genes in such tiny clusters (Figure 1). In such cases, the minimum cells per gene threshold is not necessary. 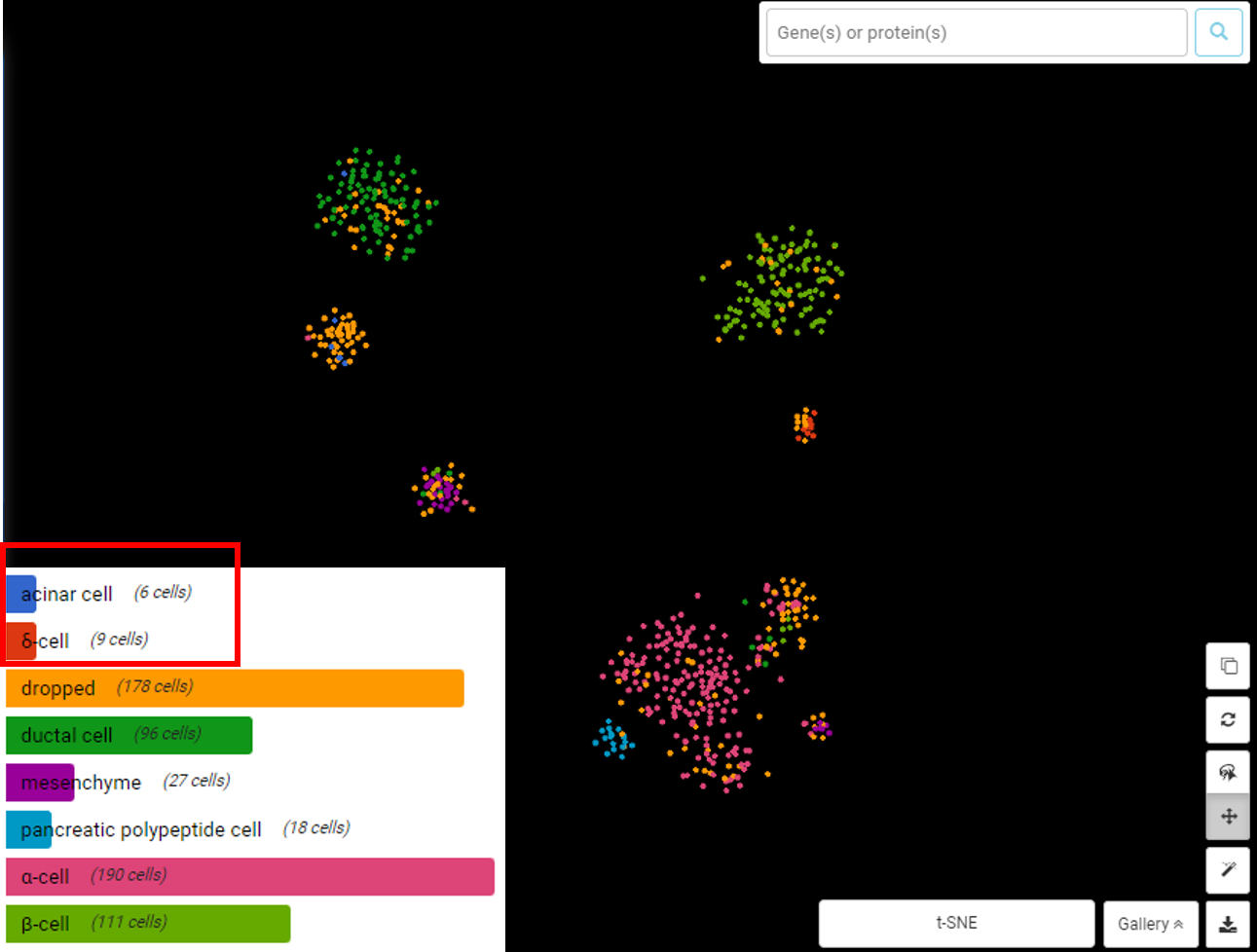 Figure 1. In this dataset of Wang, et al. (2016), acinar cells and δ cells exist in smaller-than-usual clusters (6 and 9 cells, respectively). Visualization by BBrowser

Example 3: the count depth. Cells with low counts and/or genes may correspond to quiescent cell populations, and cells with high counts may be simply larger in size (example Figure 2). In this dataset of  Velten, et al. (2021) on leukemic and pre-leukemic stem cells, the majority of CD34+HBZ+ blast cells have a lower count depth than the rest of the dataset. If we place a cut-off at the red line, we’ll inadvertently remove most of this cell population. 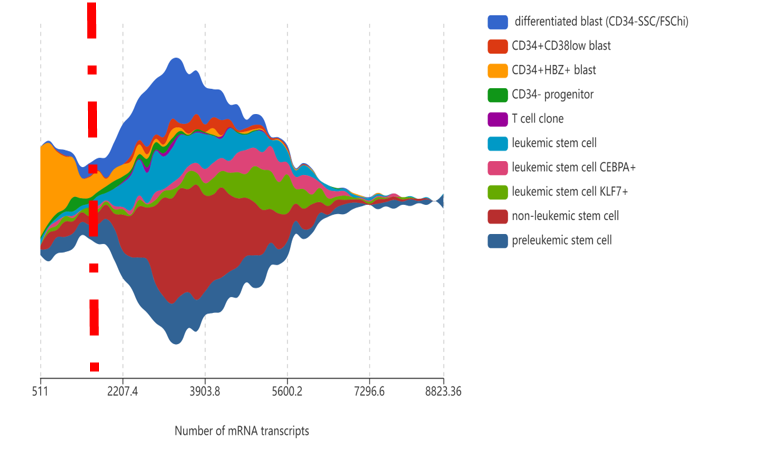 Adjusting QC parameters jointly can lead to more efficient filtering. Luecken & Theis, (2019) demonstrated how visualizing QC parameters together helps identify more suitable thresholds:  Figure 3 shows two cell populations with opposite QC  distributions: one population contains cells of a high number of genes but low to moderate count depth, and the other contains cells with a low-to-moderate number of genes but high count depth. Cells are colored by the mitochondrial fraction.

If each parameter is set individually, only a small number of cells can satisfy all thresholds. By combining them together, we can easily locate poor-quality cells (low count depth, low genes, and high mitochondrial fraction) and retain as many viable cells as possible. 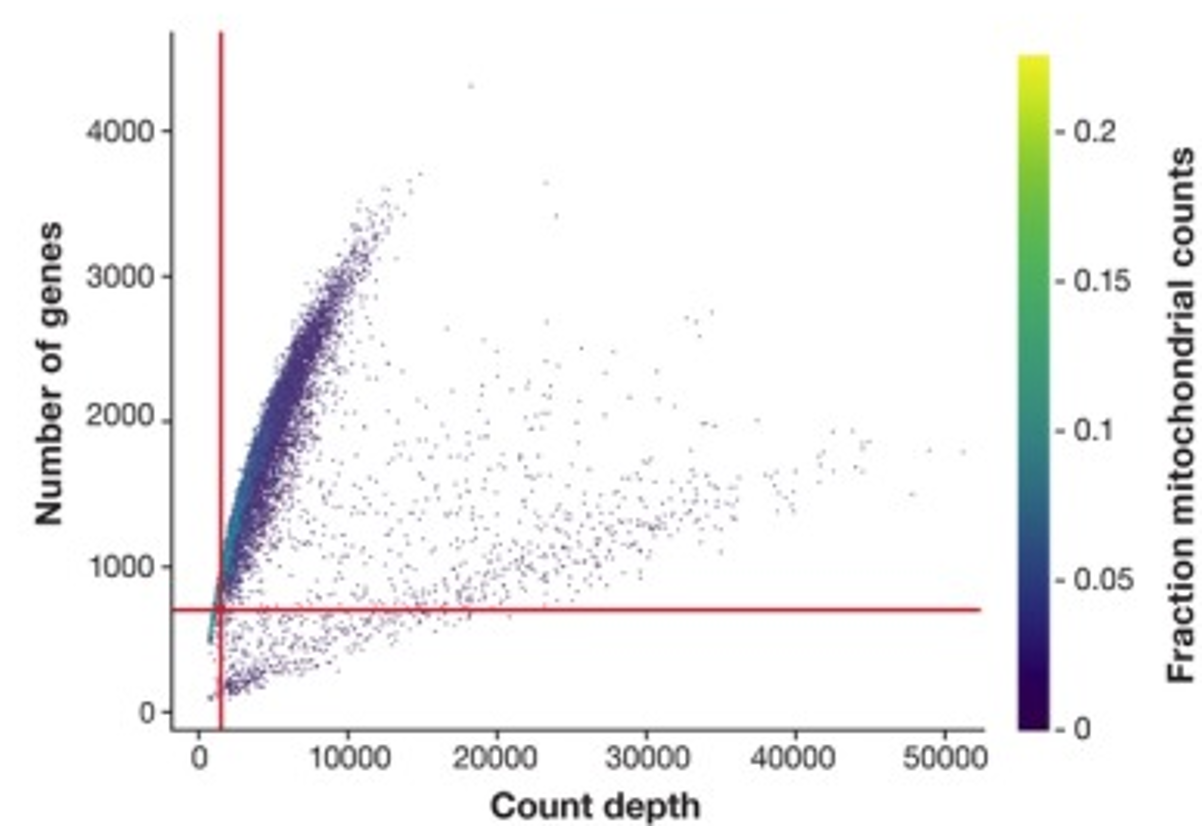 A wise strategy should be to set the parameters as permissive as possible in the beginning to avoid filtering out viable cell populations unintentionally. Then, depending on how downstream analysis performs, users can re-adjust QC parameters (Luecken & Theis, 2019). While this iterative strategy is simple and useful, users should be aware of introducing bias, forcing QC parameters to gain desirable results rather than observing the truth.

Let’s take the dataset of Cohen, et al. (2021) as an example of how this strategy works. The data contains PPIA-knocked-out RPMI-8826 cells to investigate the role of PPIA in multiple myeloma resistance. The cells were treated with carfilzomib (a proteasome inhibitor), cyclosporine (a PPIA-specific inhibitor), or their combination, along with a control (no treatment),

With BBrowser, users can preview the distribution of cells by the number of expressed features (i.e genes) and vice versa, and the mitochondrial count. In this specific example, we notice that there are 2 cell populations, represented by 2 peaks in all histograms. 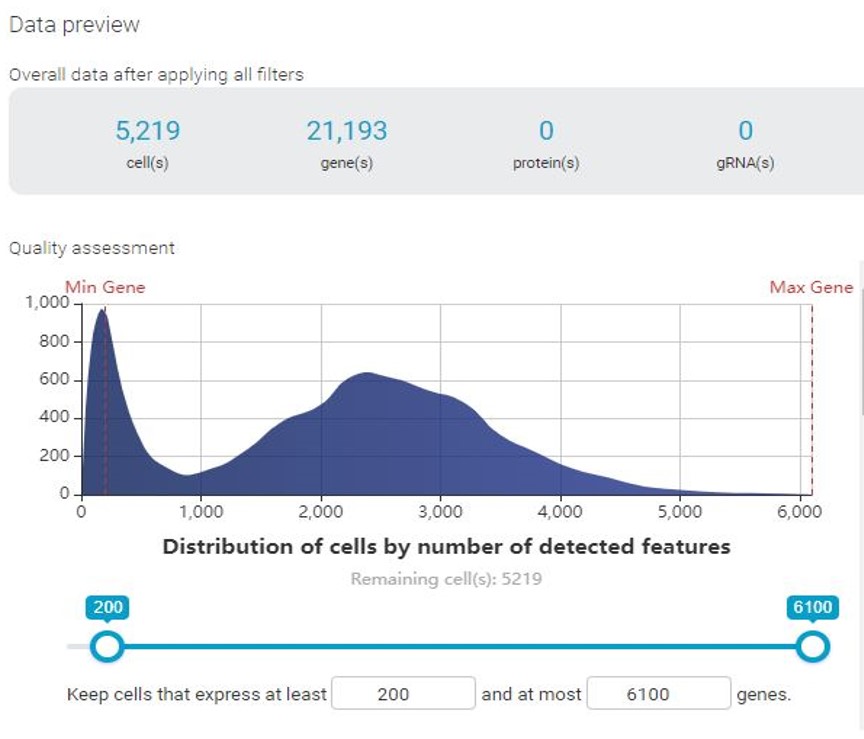 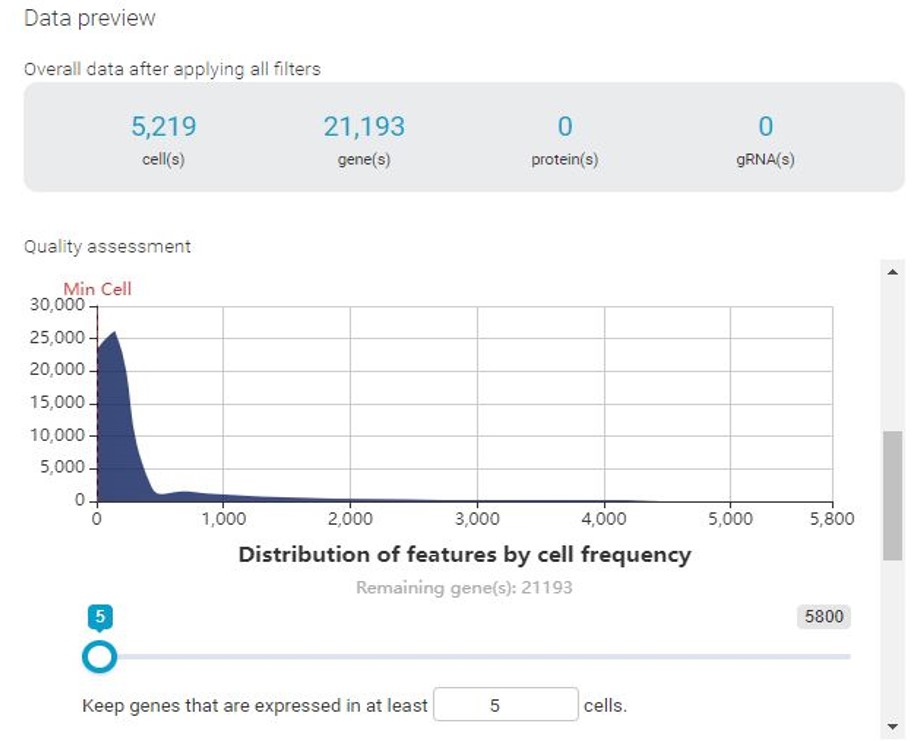 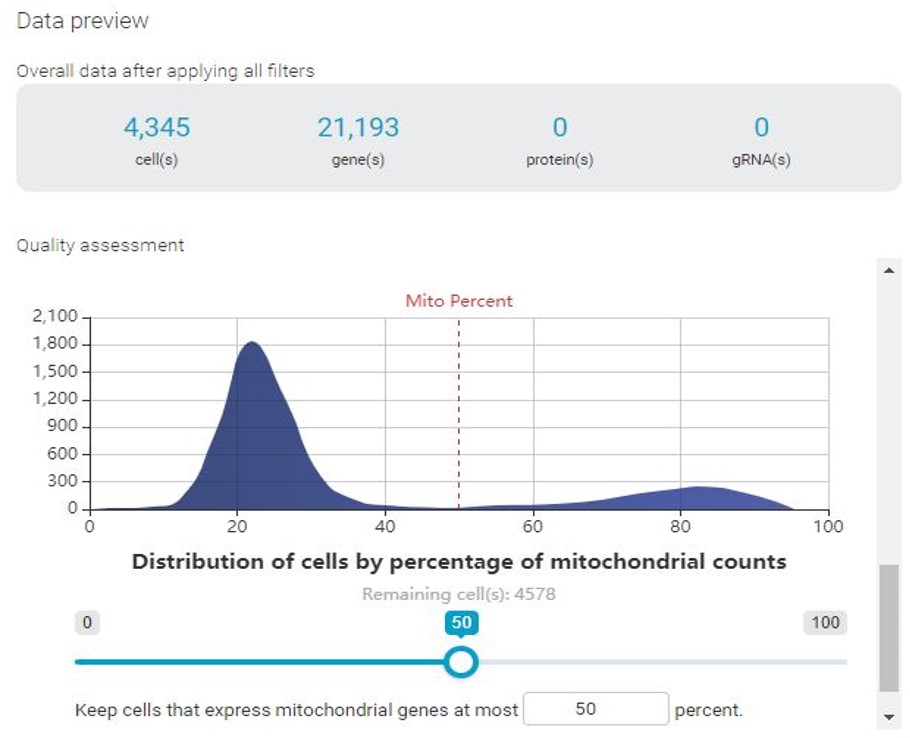 If permissive QC thresholds were applied, the clustering result reveals a distinct cluster corresponding to cells with low genes expressed and low count depth. In this cluster, different treatment groups are not separated as clearly as the rest. Enrichment analysis reveals that this cluster is enriched with mitochondrial, indicating a high mitochondrial count. Based on these results, we can be sure that these cells are of low quality and will not contribute to further analysis, thus need to be filtered out.

Cells with a low count depth and a low number of genes cluster together. In this cluster, treatment groups are not clearly separated as the rest of the higher quality cells 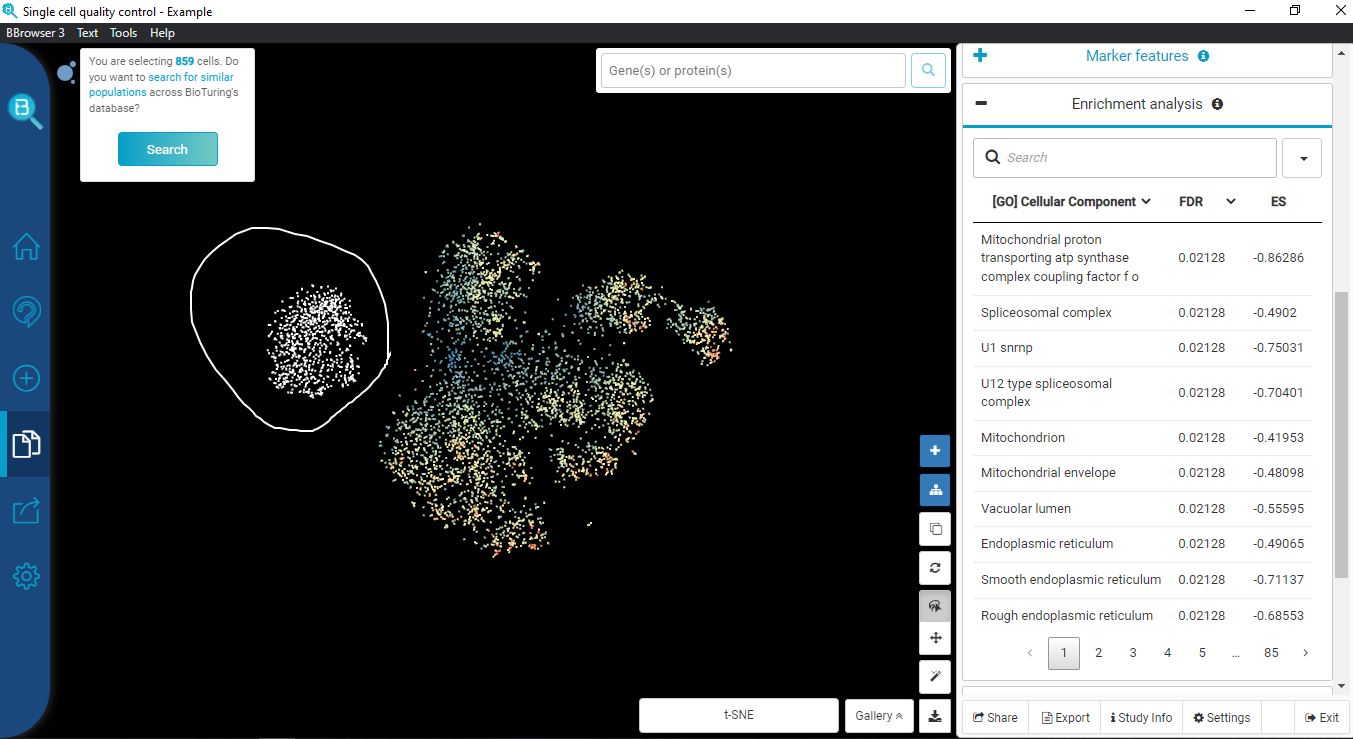 Here’s the clustering result which is consistent with the study design: ”no treatment” and “cyclosporine-treated” cells form closer clusters since cyclosporine is a PPIA-specific inhibitor, thus showing no effect on PPIA-knocked-out cells’ transcriptome.   “Carfilzomib-treated” and “combined treatment” form closer clusters, probably due to the influence of carfilzomib on the transcriptome. 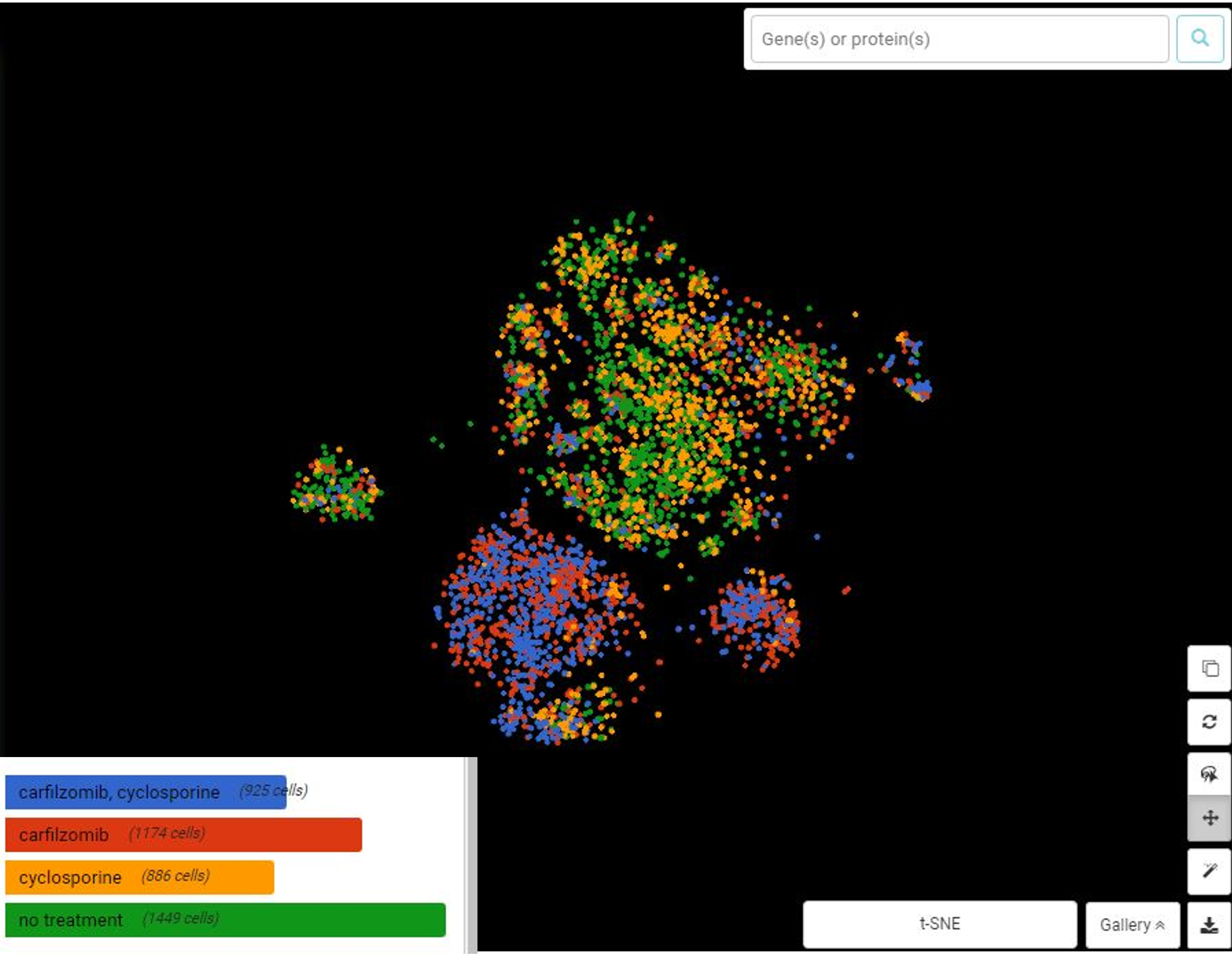