Single-cell RNA sequencing (scRNA-seq) unfolds biological processes at individual cell resolution. One key step that makes up the power of scRNA-seq is the spotting of differentially expressed (DE) genes. However, characteristics like high heterogeneity and data sparsity (high zero counts) are the main obstacles in finding DE genes in scRNA-seq data.

These challenges gave rise to a plethora of DE analysis tools. According to the scRNA-tools database, at the moment of writing, there have been over 1,200 tools dedicated to scRNA-seq data analysis, of which 130 tools are for DE analysis.

So, are we left to get lost in the maze of scRNA-seq DE analysis tools? Let’s not despair. While there’s no best performer, we can enjoy a wide range of options that, if carefully chosen based on our data characteristics, still bring out optimal results.

In this article, we’ll summarize several comparative studies on scRNA-seq DE analysis tools, in hope of providing you an escape out of this maze.

According to Das et al, (2021), each differential expression analysis tool’s performance depends on several factors, with the most critical ones are:

Based on these considerations, current popular DE analysis tools can be classified as in Figure 1. 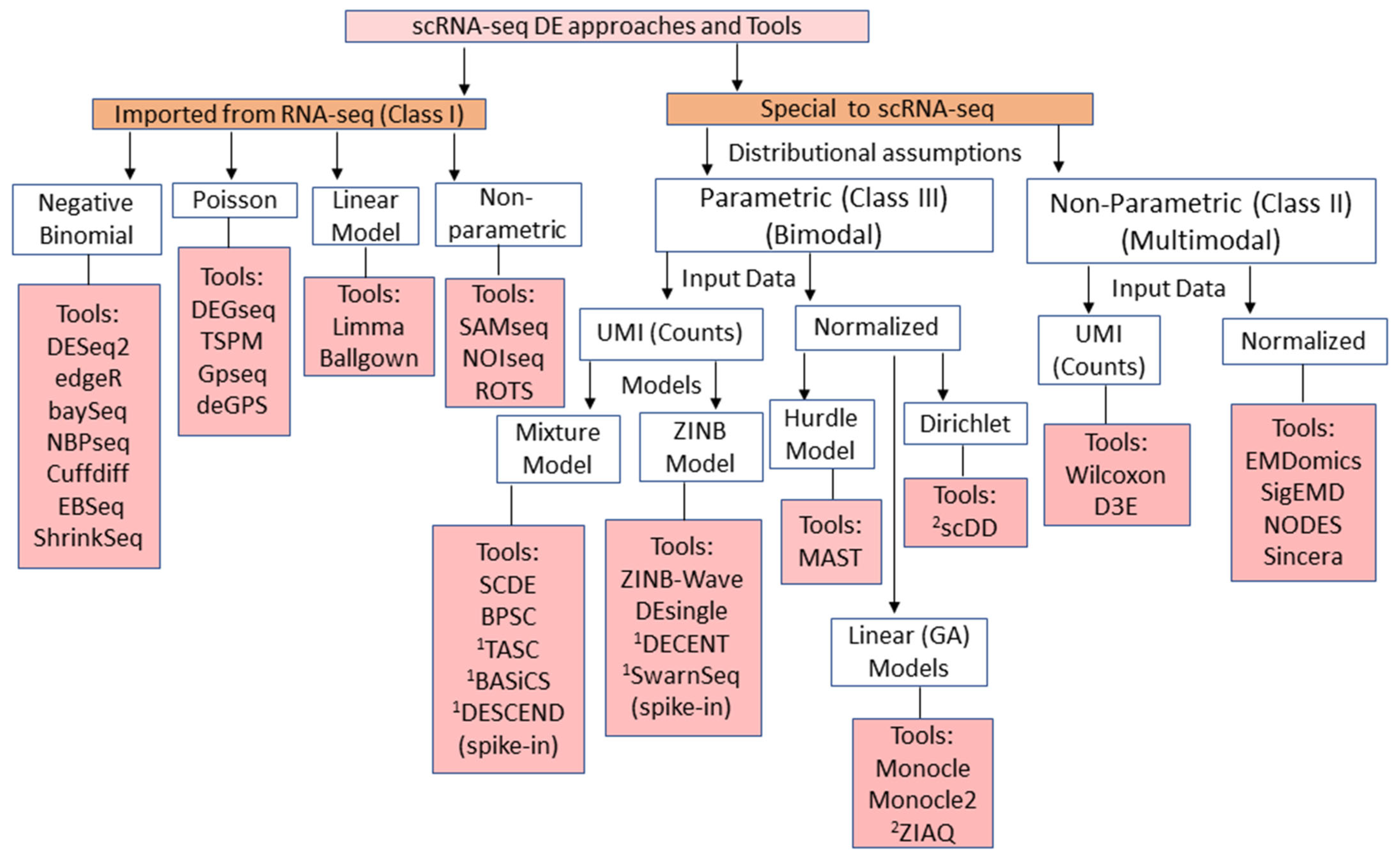 In the same study, the authors also provided a quick chart to summarize the features of each class, along with their features and limitations (Table 1). 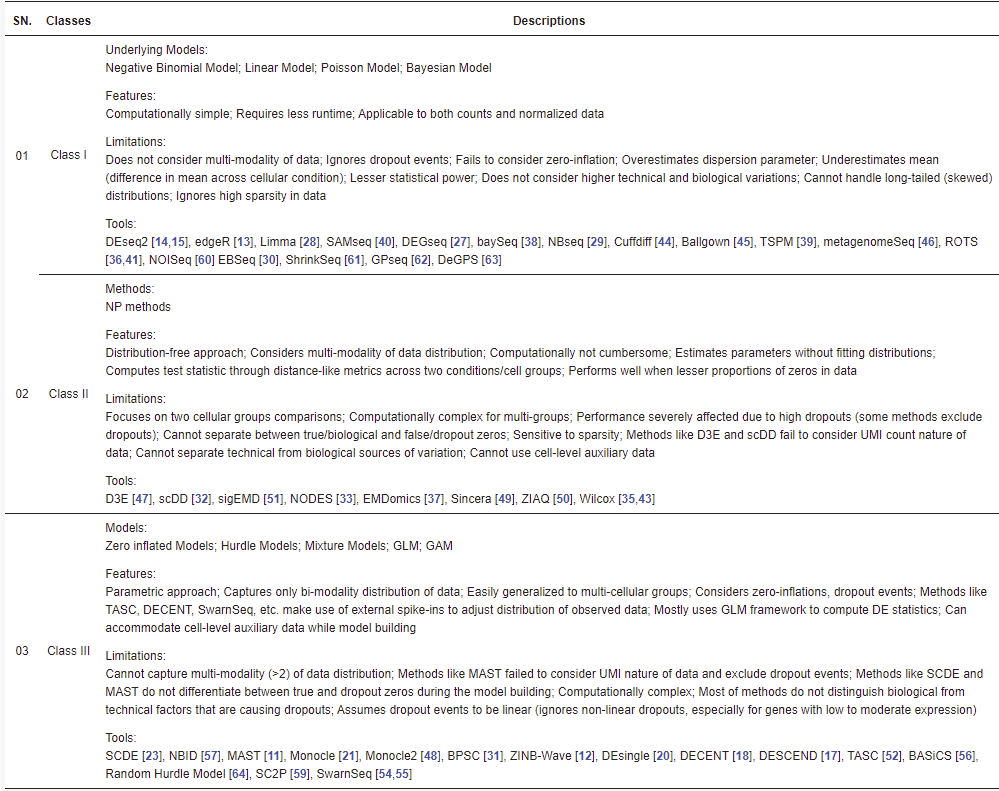 The growing number of DE analysis tools is intimidating, but not all tools gain researchers’ trust. The options have been greatly narrowed down, fortunately, since only a small number of tools are being used by the majority of researchers. According to Squair et al., (2021), in 500 latest scRNA-seq studies, only 11 methods made up to over 80% of DE analysis, with the Wilcoxon rank-sum test being the most popular choice (Figure 2). Nevertheless, bear in mind that popularity doesn’t always guarantee success.

Out of the top 11 tools, 4 are available in BBrowser, namely Wilcoxon, DESeq2, t-test, and Likelihood ratio test. We also develop Venice, a non-parametric method with an out-of-the-box approach in finding DE genes.

However, in scRNA-seq data, due to cell heterogeneity, gene expression cannot always be distinguished as up/down-regulated. In other words, the gene expression may follow a multimodal distribution. This multimodality is the main challenge in finding DE genes in scRN-seq data.

Earlier methods (DESeq2, limma, etc.) try to fix the problem by fitting/normalizing the multimodal gene expression into single-modality. In contrast, Venice uses multimodality as a metric: when comparing gene expression from 2 groups of cells, the algorithm divides cells in each group into quantiles based on their expression values. A gene is up-regulated if its expression in group 1 is higher than group 2 for every quantile (and vice versa for down-regulated genes). Genes that do not fit into this metric are called “transitional markers” – their expressions are higher for some quantiles and lower in some other quantiles. In a benchmarking study, Venice’s performance outcompeted 14 other tools (Vuong et al., 2020) (e.g Figure 3). 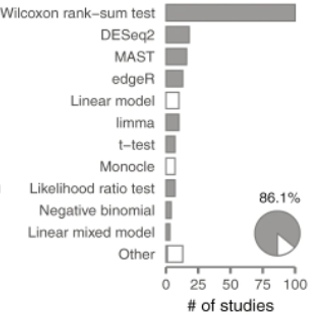 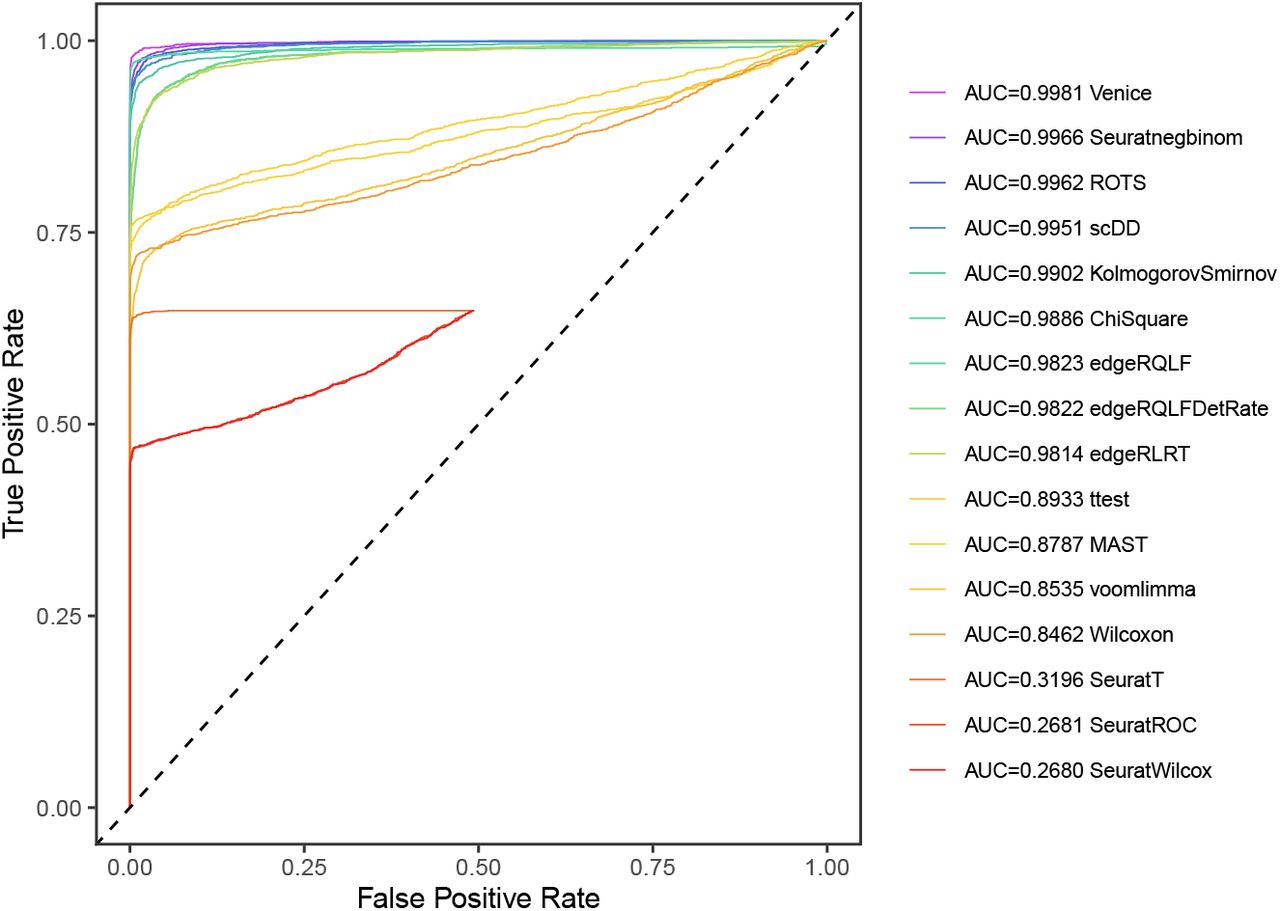 Some Noteworthy Conclusions from Comparative Studies

For this factor, the rules of thumb are:

3. The Risk of False Positive From Biological Replicates

According to Squair et al., 2021, many popular tools can be misleading if they ignore the variation between biological replicates. The study found that within the same experimental condition, replicates can still differ due to technical variation. This will become the source of false positives DE genes. In summary, the authors observed that:

The maze of scRNA-seq differential expression analysis tools is hard to beat. The number of tools will keep increasing, as new tools are being developed and current tools are getting updated frequently. Will we ever find out the best scRNA-Seq DE analysis tool? Probably not. But can we find the most effective tool for our data? Possible. Since the performance of DE analysis is data-specific, a good understanding of our data’s characteristics and the principles of available tools can help us figure out the best choice.